On December 10, the Secular Humanist Society of New York book club will discuss Acquiring Genomes by Lynn Margulis and Dorion Sagan; details here (Carl Sagan's The Varieties of Scientific Experience has been featured in the past).
Posted by Joel Schlosberg at 11/09/2009 11:59:00 PM No comments:

On November 11 and November 15, the Museum of Modern Art will screen, with live piano accompaniment, one of the earliest animated features ever made (and made by one of the earliest female animators), Lotte Reiniger's 1926 Arabian Nights fantasy The Adventures of Prince Achmed. Reiniger made films by painstakingly animating intricate silhouette cutouts, and the results are gorgeous to behold. The screening is part of a series on film preservation, and so I assume it's a restored version; I haven't been able to find out exactly how (or if) this differs from the version that has been available on DVD for a while, but the runtime given is 8 minutes longer than the DVD's.
Posted by Joel Schlosberg at 11/09/2009 10:20:00 PM No comments:

I'm too busy right now to do a real post (and I will eventually put up a post about the 2009 reunion, which was highly successful), but wanted to mark the occasion; I've posted previously about the subject here, here, and here.
Posted by Joel Schlosberg at 10/13/2009 12:01:00 AM 1 comment:

In only a few weeks, October 13, 2009 will mark the 100th anniversary of the death of educator Francisco Ferrer, an important figure in the history of freethought, education reform, and anarchism, whose execution for attempting to found secular schools in Spain sparked a long-lived movement in the United States to preserve his ideas and introduce freedom in education. I've already written blog posts on the 2006 and 2008 anniversaries, that give the background as well as I can. (I'm not going to organize a full-scale blog-a-thon like my Carl Sagan one, but feel free to post something appropriate on the anniversary, and I'll link to it.) Also, this Saturday brings the 2009 reunion of the Friends of the Modern School alumni association, held at Rutgers University in New Brunswick, New Jersey, near the site of the modern school and colony which was at Stelton, New Jersey; this is not just a way for people associated with the school to keep in touch, but a way of preserving the history and discussing related issues; members of the general public who are interested in the history are welcome to attend.
Posted by Joel Schlosberg at 9/22/2009 12:05:00 PM No comments:

What happened to Google Video?

I recently noticed that the webpages for individual videos on Google Video (I'm not talking about other pages on the site such as the front page or search pages) have had a bunch of little changes in layout and features made to them. To see what I mean, compare this screenshot of the old interface to the current version of the same video's page.

Frustratingly, some of the old features and video information have seemingly been completely removed, including the "view video at 100% or 200% size" menu options (turning some videos into a blurry mess when blown up to the full player window — yes, you can get around this by making your browser window smaller, but it's not exact, and it shouldn't be that hard to let the user specify whatever exact zoom ratio one wants); the "comments" and "more from user" tabs (the latter tab was always poorly implemented, with its pages of thumbnails to click through, but it was better than nothing); the green text line underneath the video title that lists the video's author info; and the listing, next to the video title, of the date a video was posted (replaced by a less precise "2 years ago" or the like).

The site has been circling the drain for a long time, as other, newer video sites have become more popular, particularly since Google disabled the ability to add new videos to the site earlier this year (though they left the existing videos alone at that time), and the old interface was somewhat clunky. But it was one of the oldest video websites around, and still has a sizable amount of content. And the changes don't seem to be netting much discussion (in fact the admittedly quick searching I've done hasn't turned up any discussion on blogs or elsewhere about the changes).
Posted by Joel Schlosberg at 9/10/2009 12:30:00 AM No comments:

dorkbot-nyc is coming this fall

dorkbot-nyc, the funky meeting space for robot builders, programmers, nerds and other "people doing strange things with electricity" (although "We're very flexible on the people, strange and electricity parts"), is resuming this fall after a summer break (as it does each year); the details for the September meeting have just been posted.

Although I attend every meeting, my blogging about dorkbot-nyc has been somewhat irregular over the years (mostly due to laziness), but this season I'll try to be more conscientious about it.
Posted by Joel Schlosberg at 8/25/2009 11:55:00 PM No comments:

The 1964 film by Sergei Paradjanov which provided the title for Carl Sagan and Ann Druyan's book (and whose DVD release was noted here previously) is being screened, in a new 35mm print with subtitles, at Anthology Film Archives in NYC on the 21st and 23rd. AFA's website describes it as "[a] boldly conceived and astonishingly photographed blend of enchanting mythology, hypnotic religious iconography, and pagan magic."
Posted by Joel Schlosberg at 8/11/2009 10:45:00 PM No comments:

new blog: According to Carl Sagan 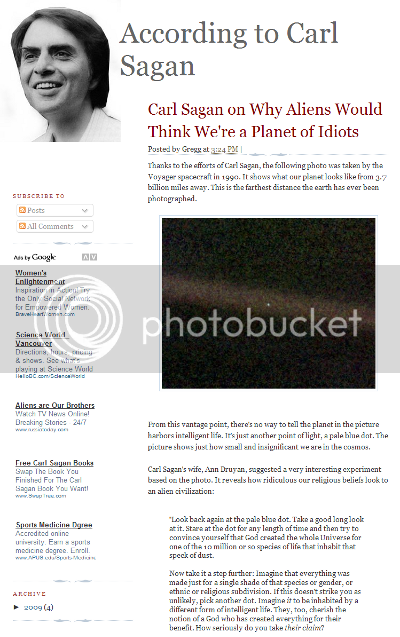 There's a brand-new Sagan-related blog in town; topics in the 4 posts so far have ranged from the evolutionary origins of sports to neglected rocket pioneer Robert Goddard. Since Carl weighed in on a truly wide variety of topics, there should be plenty of material to blog about. 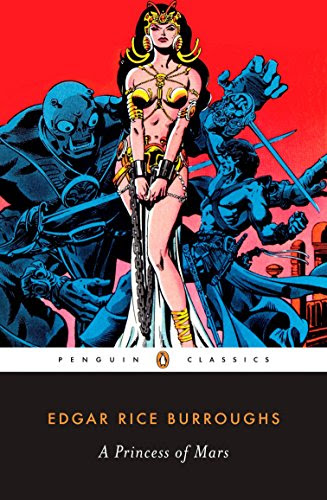 As the title suggests, on LiveJournal, there's a community called "Carl Sagan Lives On", described as "an open community dedicated to the life, wisdom, and legacy of Carl Sagan." It's been running since 2003, with 94 posts in total; the number of posts has tapered off recently (only 6 posts in 2008), but maybe this post will encourage a few LiveJournal users to join up (after all, the news that Cosmos is on Hulu prompted the most recent post).

(This is the beginning of a few Carl Sagan-related posts that I'm cross-posting to Celebrating Sagan.)
Posted by Joel Schlosberg at 4/05/2009 11:00:00 PM No comments:

Cosmos is now on Hulu

Well, the website which has become known for offering up full-length TV shows (and a few movies) for free, ad-supported viewing (with a selection including a good amount of genre shows from The Addams Family to Firefly, but very light on science shows, and no, this doesn't count) has added the complete run of Carl Sagan's TV series to the mix. I guess this needs no further explanation, but Hulu's description is nice, especially the final sentence:

In 1980, the landmark series Cosmos premiered on public television. Since then, it is estimated that more than a billion people around the planet have seen it. Cosmos chronicles the evolution of the planet and efforts to find our place in the universe. Each of the 13 episodes focuses on a specific aspect of the nature of life, consciousness, the universe and time. Topics include the origin of life on Earth (and perhaps elsewhere), the nature of consciousness, and the birth and death of stars. When it first aired, the series catapulted creator and host Carl Sagan to the status of pop culture icon and opened countless minds to the power of science and the possibility of life on other worlds.

The version of the series used seems to be the same as the 2000 DVD version; it's especially nice to have Ann Druyan's introduction at the beginning of the first episode, as well as the 1990 updates at the end of episodes like The Edge of Forever. (I'm guessing that the DVD music changes are still in there.) And unfortunately, the website is restricted to viewers in the United States.

Man, I can remember quite a few of the home video incarnations of the series, beginning back in the 1990s with occasionally seeing the humongous boxed set of the series on VHS (sometimes with a paperback of the book thrown in for good measure) in science museum gift shops and the like; being completely overjoyed to find a fraction of the show's run on 2-episodes-per-VHS tape at a Blockbuster; the DVD release in 2000 with gorgeous packaging, going for $100 or more; last year's iTunes release for $1.99 an episode; and now, finally, this. I wouldn't go quite so far as agreeing with John Scalzi's comment that "the Internet has just justified its existence" (and the hardcore fans have a copy already, although now they won't have to lend out their copy to friends), but it's definitely the next step.

And of course, the news kicks off another round of Sagan fans' reminiscing about the impact of Cosmos and Sagan (just as the iTunes release did a year ago), in blogs (I'm pointing to a blog search rather than try to pick out favorites) and comment threads like this one.
Posted by Joel Schlosberg at 3/24/2009 11:00:00 PM No comments:

A libertarian letters to the editor response team?

I've been mulling over the idea of doing what it says in the title, motivated in part by this misguided take on Herbert Spencer ... details here.
Posted by Joel Schlosberg at 2/03/2009 11:30:00 PM No comments:

Mystery Quote of the Day

Guess who wrote this:

One of the odd features of a capitalist system is how socialist it is. Firms interact with customers and other firms through the decentralized machinery of trade. But firms themselves are miniature socialist states, hierarchical organizations controlled, at least in theory, by orders from above.

I'm back to blogging

Well, after unofficially taking a month-long "vacation" from blogging during January, I'm trying to get back to posting on a regular schedule, and am aiming to post something (even if it's just something as short as a quote) daily for the rest of the month.
Posted by Joel Schlosberg at 2/01/2009 11:45:00 PM No comments: