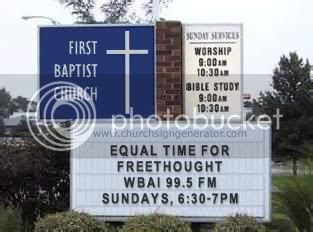 Last week, the map I created for listeners of the radio show on scientific naturalism and secular humanism Equal Time for Freethought (for which I am on staff as a researcher/consultant), which airs on WBAI in the metro New York City area, finally went live with a link on the official site.

The map is made via Frappr, a super cool site that uses Google Maps to allow people in a group to post their locations on the planet. (For more examples of ways people are using Google Maps, see Google Maps Mania.) I've also created a couple of other Frappr groups: for Distributed Proofreaders (forum thread) and dorkbotters (that is, people who go to dorkbot, including the local nyc group).

I'm very pleased to see that the first two listeners to add themselves, besides the staff members of the show, are all the way from Grand Rapids, Michigan and Mayer, Arizona! Clearly, the show is being heard via the online WBAI stream and program archives (older, no longer updated archive of some 2003 shows) as well as on the local radio.

It's also cool that Mark Plus has referred to the science fiction movie Stargate, which I also like (and which is unfairly dismissed by some critics as just another dumb shoot-'em-up). Not only does it celebrate the intellectual curiosity of James Spader's unabashedly nerdy linguist, but in its depiction of a basically decent and innocent group of people being lorded over and kept in ignorance by a violent, vindictive, anachronistic god, it parallels the rise of militant Islam and other fundamentalism today, for instance this quote from Sam Harris's The End of Faith:

It is as though a portal in time has opened, and fourteenth-century hordes are pouring into our world. Unfortunately, they are now armed with twenty-first-century weapons. (p. 107)

Feedback is welcome! You can post feedback in the comments section for this post, and tell us about your experience with ETFF. For instance: How did you find the show? (Especially for people outside of the metro-NYC area) What are your favorite episodes? How does the show's worldview fit in with your own?

A decade of Pixar feature films

Today marks the 10th anniversary of the release of Toy Story, rounding out a decade of feature films from Pixar.

I literally grew up alongside computer graphics; Tron was released, on July 9, 1982, just a month before I was born; also, the adolescence and adulthood of the medium parallel my own. I remember missing Toy Story during its original theatrical run (remember how back then, it was promoted as a "Disney" rather than a "Pixar" film?), instead seeing Jumanji (what a load of crapola that was) while Toy Story was playing on a different screen of the same theater. However, I didn't miss the revolution for long: I've looked forward to each new release since Monsters, Inc.'s wickedly clever trailer in which the characters wind up in outer Mongolia instead of outer Magnolia (oh, the pain-of-anticipation of seeing that one a full year before the release of the film itself).

Pixar has moved from one artistic triumph to another, barely missing a beat: the early shorts like Luxo Jr., Red's Dream (which spawned the spoof Red's Nightmare, itself an impressive example of early CG), and Tin Toy are perfectly charming and work smoothly within the technical limitations; Toy Story looked like it would be a mere exemplar of the crassest product placement imaginable; Toy Story 2 became a worthy sequel (one critic said that in the scene where Jessie the Cowgirl is abandoned by her former owner, the film makes you cry over a computer generated piece of plastic!); and The Incredibles showed that animation was able to deal with human characters, and was a better example of the genre than most "real" superhero movies. Sometimes, they've been one of the few worthwhile movies in their respective years. (For example, in 2003, Finding Nemo faced off against Dumb and Dumberer, Daddy Day Care, The Cat in the Hat, and The League of Extraordinary Gentlemen.) They're to today what rock'n'roll was to the Sixties: the best of an era.

Like Pixar's early shorts, other very early examples of CG that were done well and in keeping with the film, like the Genesis Effect in Star Trek 2 and the T-1000 in Terminator 2, also hold up well. One interesting and almost unknown predecessor is the work at the Computer Graphics Lab at the New York Institute of Technology, where they attempted to make a feature called The Works over a decade before Toy Story. Traditional animator Shamus Culhane (who worked at most of the major studios of the time including Fleischer, Disney, and Walter Lantz) visited them and included tantalizing descriptions of the lab in his two books, Talking Animals and Other People and Animation: From Script to Screen. In the former, he concluded by saying (in 1986) that

I am convinced that computer animation will produce beautiful works of art — beautiful beyond our most fantastic dreams.

Online, there's a fascinating 1983 article about the making of The Works, a collection of pictures from The Works and other CGL projects, and a 1984 animation of Gumby by the creator of the original stop-motion version of the character, Art Clokey (this was one of the earliest examples of character animation using a connected, flexible body rather than segmented, separate parts).

One interesting development is the existence of personal websites of Pixar animators like Victor Navone (his movies page has showreels of the particular scenes he animated on Monsters, Inc.; Finding Nemo; and The Incredibles — a welcome contrast to the anonymity of most animators) and Cameron Miyasaki. One could arguably include Bruce Perens of open source fame, who worked at Pixar as a programmer for software used in the films A Bug's Life and Toy Story 2; see his post on a debian mailing list at the time of Toy Story's release (his involvement in both Toy Story and the Linux distribution debian is the reason why debian's releases are named after Toy Story characters).

Looking at the state of CG today, it's easy to conclude that the other big studios haven't made much of the medium's artistic potential. The Onion once said (I haven't been able to find the source of the quote) that CG has often been "the worst parts of terrible movies", producing particularly annoying characters for the live-action likes of Scooby-Doo and Kangaroo Jack. While Shrek was funny and charming, the copies of its humor became tiresome; perhaps Ice Age was the best with its successful updating of slapstick comedy. The overemphasis on big-name voices has been particularly obnoxious, amounting to saying, "Hey, I'm Will Smith, I'm a clam! I'm Will Smith, I'm a kangaroo!" as Billy West — one of the generation of voice actors who got by on their ability to actually, well, voice cartoon characters — put it in an Onion interview.

So, I want to see the rise of vibrant indie CG features with wacky unique visions, to compare with the likes of those by traditional independent animators like Lotte Reiniger, Ladislas Starewicz, Sylvain Chomet, and Bill Plympton. The decrease in cost of computer animation equipment and software has led to a hobbyist CG community, often using freeware apps like POV-RAY and Blender (see their official movies gallery and the entries in this year's animation festival).

Where will CG be on November 22, 2015? CG technology has opened up a limitless play space, whose possibilities have just been marginally explored. Dare I say "To infinity and beyond!"? Let's prove Culhane right!

Earlier this month, the Pew Internet and American Life Project released a study about American teenagers on the Net. This showed that not only are teens sophisticated users of the Net, they're also using it as creators. The most impressive statistic is that over half of teens who used the Net created content; particular forms such as blogging, personal webpages, working on webpages for other people, and even remixing of existing content are all fairly common.

The report confirms what I've definitely seen of the existence of a "generation gap" in Net use, especially for leisure as opposed to basic activities, like email for everyday communication, and reference. A lot of older people I know don't appreciate the significance the Net, seeing it as just another unproductive diversion for brats with too much time on their hands. For me it's odd, because I was in the era just before the Net came around; it wasn't a significant factor in my teen/high school years, only really getting into it in my 20s; so that I didn't grow up with it but rather came of age with it. It's funny, all the little ways that it's changed things; for instance, not getting references to subjects I didn't know about, whereas nowadays a Google search has a good chance of turning up the relevant explanation. And anyway, the Net has only recently actually come to its potential as a truly participatory medium, where such participation and real interaction is practical and widespread.

However, the study showed that kids are usually fortunate enough to have adults who do appreciate, and benefit from, their kids' superior technical prowess:

Parents of online teens view the internet and email as a positive addition to their children’s lives and teens are often the ones leading the technology adoption curve in their households.

Bloggers are tech-savvy and intrepid internet explorers. Bloggers and to a lesser extent teens who read blogs are internet omnivores who explore, play with, utilize and generally inhabit the internet with a greater abandon than their less blog-savvy counterparts.. They help adults do things online.

The New York Times had an article about the study, which pointed out that teens are just messing around, "tinkering with the toys that the digital revolution has put before them" rather than consciously being "at the vanguard of change". This was summed up with a good quote from one teen:

I taught myself how to use the Internet, so basically it was just a step-by-step process that clicked into my head. I just read directions and that's how I set it up. Pretty simple.

One thing that young people have in their favor, in this regard, is exactly that they haven't intimidated themselves into believing that such activities are more complicated than they are.

Speaking of the real Teenage Mutant Ninja Turtles, it so happens that the first comic book issue featuring them is online in its entirety at the official website.
Posted by Joel Schlosberg at 11/14/2005 12:21:00 AM No comments:

A few days ago, less than a week after reading Keay Davidson's biography of Carl Sagan, I was browsing through the library and randomly came across a science fiction novel by Carl's son Nick Sagan (the third of Sagan's five children). Although I had heard of Nick's career as a TV writer (including, appropriately, for Star Trek series The Next Generation and Voyager), I had no idea that he wrote science fiction books. In fact he has written two SF novels so far: Idlewild (2003) and Edenborn (2004). I can't opine on the novels, not having read them, but I'm pretty sure that Steven Baxter is right when he says that Nick "has a sense of wonder in his DNA." ;)

So I checked his site (see the pictures page for some photos of him with Carl!), and he has a brand-new blog that just debuted earlier this week! In fact, it debuted on Halloween and in his first post he weighs in on his favorite holiday (mine too; in fact, I found my own way to tie it in with SF).

(I'm trying to think of other personal websites by children of famous people; the only one that comes to mind is that of humanistic psychologist Carl Rogers's daughter Natalie Rogers.)

Welcome to the blogosphere, Nick!