A quick note: my blog has recently been added to the Planet Humanism blog aggregator.
Posted by Joel Schlosberg at 9/26/2007 10:55:00 PM No comments:

Exactly what it says ... stuff that's happened since last time.

Today's the right time to drop in a note about my plans to do a follow-up to this previous post about Douglas Rushkoff. I've wanted to post thoughts about Get Back in the Box and Nothing Sacred, and Rushkoff has dropped hints about his truly intriguing upcoming project, which will be about corporatism. But instead of a real post for now, I'll throw out a link to a video of a Rushkoff event about "Testament, Get Back in the Box and Corporatism", which took place at the Astor Place Barnes & Noble on February 28th of this year; I really should have blogged about this a long time ago since I was there, and can be seen in the audience: 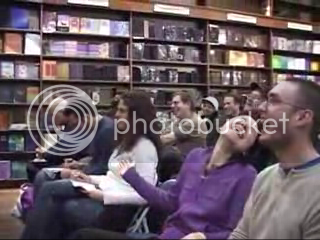 Three new eBooks that I worked on have been added to Project Gutenberg:

"A World is Born" by Leigh Brackett, from Comet magazine, July 1941.

This short story is one of her "sword-and-planet" stories that took place in the rest of the Solar System; of course almost nothing was known about what the planets were like, so this provided the opportunity for writers to imagine what might be there. Brackett's versions drew upon existing genre tropes, but had a special quality of their own; the environments were vivid enough to almost be characters of their own. In this case, the setting is Mercury; Edmond Hamilton aptly described her version of it:

The Brackett Mercury, lacking the glamor of Venus and the haunting sadness of ancient Mars—there is no history here, and no beauty—has a certain harsh authority even so. Nature is the chief villain, and a convincingly nasty one.... Leigh's concept of a world where tremendous mountains went up literally beyond the sky, where the cliff-locked valleys were racked by violent storms and sudden rockfalls, and life was a precarious thing beset by heat and cold, thirst and starvation, is a nice little view of hell.

(Well, Legacy was posted back in May, so it's old news, but I expected them to be posted at around the same time.)

Space Prison is about a group of humans stranded on a truly hostile planet (not unlike Brackett's Mercury), with minimal resources and nasty creatures. It follows a recurrent Godwin theme of solidarity against a hostile universe.

I actually read Legacy a few years ago, well before becoming a DPer, as part of a Schmitz kick after Baen put his works back in print (also prompted by finding Guy Gordon's venerable Schmitz Encyclopedia fansite in the early days of the Web, a bit before the reprints started). What stands out in my memory is the characters, in particular the protagonist Trigger Argee, who was in a few short stories but really shines here.

As was common with paperbacks, both novels are retitled (the original titles are The Survivors and A Tale of Two Clocks, respectively.) Another thing the books have in common is that the folks over at Baen are fond of them, so that not only have they put those books in print, but unbeknownst to me when I started working at them, they were both online in their entirety at the Baen website; here are links to the Baen version of Space Prison (where it has the original title The Survivors) and Legacy. But at least those versions don't have the original front/back cover and blurbs, like this one has.

I'm pleased to announce that I'm now an official contributor to the Celebrating Sagan website and blog. This is a site that appeared at around the same time as my blog-a-thon last year, and which had a similar mission of remembering Carl and his legacy. In particular, it was specifically designed to accept reader contributions, in particular from readers without blogs, so it turned out to be a good complement to the blog-a-thon. (And so, I'm able to post contributions that are emailed to me -- although you can also send them to the core team.)

We'll see where this goes ... but one thing that's in store is audio I sent them of three half-hour interviews of Ann Druyan from Equal Time for Freethought, to go with their "Sounds of Sagan" collection. For now, transcripts of the interviews are available on ETFF's website: