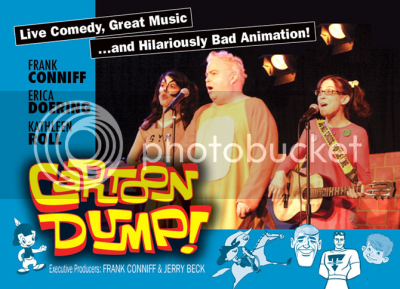 As Beavis and Butt-Head would say, "Huh-huh, huh-huh, somebody keeps taking a dump in Manhattan." 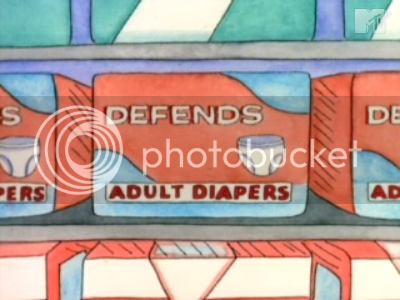 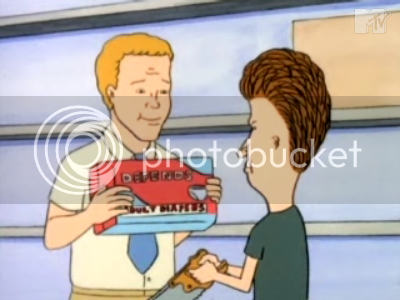 Cartoon Dump, that is — a twisted parody of childrens' shows of yesteryear combining live comedy and so-bad-they're-good old cartoons, created by animation historian Jerry Beck and Frank "TV's Frank on MST3K" Conniff (MST3K's Joel Hodgson has appeared in at least one CD installment in the past).

CD had previously existed as a live show in L.A. and a set of online episodes, but on January 8 the show came to the East Coast for the first time; and there will be new shows on February 19 (this Tuesday) and March 11.

The January show was really fun. The premise is much like the online version: Erica Doering plays the host, Compost Brite, of a warped cartoon "children's show". She's a perennially cheery and perky character with an optimistic outlook; as the old joke goes, if you gave her horse droppings as a gift, she'd say "Wow, a pony!" And she needs it, since everybody else is completely neurotic, and full of problems that would never see the light of day on a real kiddie show. The most depressed of the supporting characters is, naturally, Frank Conniff's Moodsy the Clinically Depressed Owl. Although he wears a brightly colored anthropomorphic costume, he's also alcoholic and suicidally inclined. And of course, Compost Brite always tries to extract kiddie-friendly lessons about things like sharing and making a difference, even if she's really just driving Moodsy into even deeper depression. For instance, in the third online episode, after watching an atrocious Bucky & Pepito episode, Moodsy says, "There was something about that cartoon — the harsh, barren landscape; the empty, faceless characters; the overall tone of sorrow and regret — it was like a snapshot into my soul." and Compost Brite replies, "Well, I hope your soul said CHEESE!!!"

Unlike the online version (and presumably the LA version, where the online episodes were filmed) which takes place beside a dumpster, this version has no set. So, stretches of live comedy alternate with bad cartoons chosen by Jerry Beck (who introduced the cartoons and the show as a whole, but didn't act in the comedy segments). Contrary to what one might think based on Conniff's MST3K role, the cartoons are presented without any MST3K-style riffing or commentary while they're running, but the abundant laughter from the crowd is accompaniment enough (it alone makes them work much better than the online version).

The venue is pretty cool, too: a combination of comedy club and eatery, with a bar that's separate from the performance area, which doubles as a restaurant. Each of the menus features a picture of somebody who's performed at the club, such as Sarah Silverman (one of many famous comedians who have performed live there). The food is good too (if a bit pricey).

The cartoons themselves? Jerry Beck has really drawn on his vast experience to dig deep into the bottom of the animated barrel. As a result all the cartoons are really old (Jerry pointed out that they're actually old cartoons, in case anybody thought they were modern ones like the Ambiguously Gay Duo made to look old), obscure (they make the crummy formulaic cartoons that air on Boomerang look good) and cheaply and poorly designed and animated (one particularly bad sequence stood out, in which the villain and his henchman dance to celebrate their evil plan of turning people to stone; it's hard to explain in words, but the drawings just didn't flow the way they should). They do tend to be lame rather than actively painful, but still definitely provide a lot of unintentionally funny moments. And the premises are as hilariously lame as one would hope for. For instance:

Mighty Mister Titan (also in the first online episode): an exercise superhero. Really! He does jumping jacks and the like (with 4 or 5 drawings per rep) while enjoining us to join along; some of the exercises are performed in equally jerky fashion by a tip-dispensing stick figure named Tipso.

Super President: a DePatie-Freleng production (!) about, well, a superhero who's also the president of the United States. I'll just quote the show's intro for his awe-inspiring powers:

His power was born in a cosmic storm! Every molecule charged with might! Powers that enable him to change his molecular structure to steel! To granite! To whatever the need requires!

The Adventures of Sir Gee Whiz On The Other Side Of The Moon (also in the sixth online episode; since only one pilot episode of the series was ever produced, this is identical to the version the show used): This time, in one of the last pieces of animation that Hugh Harman and Rudolf Ising ever produced (!), the main character is not a superhero, but a leprechaun (voiced by Ising himself) who lives on the moon who takes a little girl (who is so poorly designed that her face looks more like that of a blowup doll) there. One of the biggest laughs came from one of the "aliens" on the Moon, who doesn't exactly put the Selenites of H. G. Wells's The First Men in the Moon to shame, Señor Ropo: 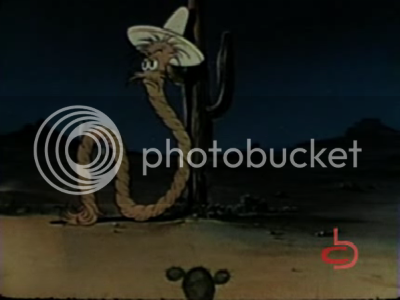 Here are the six episodes so far of the online version:
And more info:

Last Thursday, the NPR show The Bryant Park Project did a nine minute segment on dorkbot-nyc's meeting the previous day. Segment producer Ian Chillag interviewed me at the meeting, and a small snippet from me made it into the very end of the segment; I quote William Gibson's "The future is here. It's just not evenly distributed yet." (which I misattribute to Bruce Sterling) as a way of explaining the way ideas show up at dorkbot before they percolate to the larger culture. The quote, and a mention of me, also made its way into the online summary of the segment. (When Rocketboom covered dorkbot in 2006, a small portion of my head could kinda-sorta be made out for a few frames of a crowd shot; not quite as good.) Also, the presenters and Douglas Repetto are also interviewed; and some of the theme songs also appear.
Posted by Joel Schlosberg at 2/14/2008 11:56:00 PM No comments:

On Sunday, February 24th, Turner Classic Movies will be airing Contact as part of this month's "31 Days of Oscar", in which Academy Award-winning movies are showcased.

Check out the TCM Movie Database entry for the film. Sean Axmaker provides an excellent overview of the film, from the production history to the issues and themes involved; Sagan is described as "one of the most effective spokesmen for the advancement of science and space exploration in the world", and the entry also includes a quote from Ann Druyan:

"Carl's and my dream was to write something that would be a fictional representation of what contact would be like," explains Ann Druyan, Sagan's wife and collaborator. "But it would also have the tension inherent between religion and science, which was an area of philosophical and intellectual interest that riveted both of us."

Each night's worth of movies is organized by a specific decade (all the way from the 1920s to the 1990s and 2000s); it so happens that immediately before Contact on the schedule is a somewhat different 1997 alien contact science fiction film, Men in Black. Saganites have mixed opinions on the merits of MIB; Keay Davidson in his biography of Sagan dismisses it as a dumbed-down "mean-spirited bloodbath"; whereas pop-culture-savvy Nick Sagan slipped in an homage (or more precisely, an homage to an homage) to it in his short story "Tees and Sympathy":

I thought that was clear. The reason why I’m wearing a black suit and sunglasses is because I’m homaging Men in Black.

And Phil Plait answers the question of how "a skeptical, UFO-bashing, aliens-aren't-visiting-us-and-excoriating-cow- you-know-whats scientist-type guy" can enjoy the film in his review:

I loved this movie.

Surprised? "What's a skeptical, UFO-bashing, aliens-aren't- visiting-us-and-excoriating-cow-you-know-whats scientist-type guy going around saying he loves a movie whose very premise is that not only do aliens exist, but live among us?" you are asking yourself.

Well, the movie is awesome. It rocks. I laughed all the way through it. It's funny. It's also satirical, poking gentle but firm fun at the whole UFO and alien subculture.

(Also, for all the differences in tone, note that both films use a shot consisting of an extended zoom out from Earth to outer space to comment on humanity's place in the universe.)(Cross-posted at Celebrating Sagan)
Posted by Joel Schlosberg at 2/12/2008 11:44:00 PM No comments:

No, it's not a little-known spinoff of Cosmos based on Carl Sagan and Ann Druyan's book of the same name, but a 1964 Soviet film by Sergei Parajanov that inspired the name of the Sagan/Druyan book! I know nothing else about the film (it's not even a documentary as one might think, but fiction), but it's Sagan-related enough to take note of here. Some quick links to stuff about the film: