While tickets are available for the Queens Drive-In's screening of Men in Black, I may as well blog my letter to the editor from back in April about the cosmic classic, and how the real-world Queens borough hopefully is more exemplary of its populism than its simultaneous distrust of the populace.

Today's film-industry headlines, as foreseen by Premiere magazine 21 years ago: 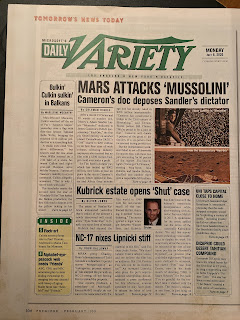 A, My Name Ain't Archie

Someday, I'll get around to elaborating on how everything wrong with American politics is that it's in the image of All in the Family rather than Family Ties, but for now, I have a letter championing Alex P. Keaton over Archie Bunker that made it to the editorial pages of the Queens Chronicle.
Posted by Joel Schlosberg at 4/21/2020 10:39:00 PM No comments: My "Small Business Versus the State" went up over the weekend at The William Lloyd Garrison Center for Libertarian Advocacy Journalism.  This is the first time I've contributed a column to comrade Thomas L. Knapp's news commentary project since 2018, but we're gearing up for more to come.
Posted by Joel Schlosberg at 4/20/2020 11:49:00 AM No comments:

Before Doug Henwood announced yesterday that his venerable mailing list described as a "forum for the discussion of economics, politics, and culture from a broad left perspective" was shutting down, I admit that I was unsure whether lbo-talk was still going, with so few messages hitting my inbox that I was genuinely unsure whether or not it had quietly vanished. (The website for the Left Business Observer it was named after tersely notes that periodical ceasing its increasingly erratic publication seven years ago, and the actual content hasn't been updated since Barack Obama's candidacy.)  Yet while he insists that "lbo-talk has said enough" and is enough of a Marxist to quote Karl that "Last words are for fools who haven't said enough" I am enough of a foolish Bakuninist to note that, as moribund as it was in its later years, its extensive archives offer a lively chronicle of the early-Internet left through the Battle of Seattle, 9/11 and beyond.

Both the content and the style offer many lessons for younger comrades who only know a slicker but inhibited Internet dominated by corporate social media giants like Facebook and Twitter. And that includes comrades far outside the realm of stereotypical hard leftists and their fellow travelers, given that the old threads even contain some kind words for Reason magazine's Nick Gillespie and Jesse Walker, Ayn Rand scholar Chris Matthew Sciabarra, or Lew Rockwell of The Mises Institute (who was even on Henwood's radio show back in the days when George W. Bush provided a common enemy).  To quote another sort-of-Marxist leftist's famous last words, "Don't waste any time mourning," but some time spent in lbo-talk's archives may lay ground for its successors (well, besides the one it already has).
Posted by Joel Schlosberg at 2/22/2020 07:57:00 PM No comments:

another day, another pair of letters to the editor

"U.S. and Russia in space" in the Queens Chronicle looks back at the little-discussed sequel to 2001: A Space Odyssey, and how it envisioned less tense relations between the US and the then-assumed-to-still-be-Soviet-in-the-2010s Russia.  (I should also clarify that I am not now, nor have I aver been a member of the Russian conspiracy, though I technically can't truthfully deny association with "H.U.A.C." since the "House of Un-American Activities" was the unofficial nickname for the home of some college friends back in the day.)


"Reducing costs" in the Queens Examiner (and the other outlets in the Queens Ledger/Brooklyn Star Newspaper Group) asks free-market advocates to stop brushing aside concerns about "materialism, social inequality and economic instability" and instead start pointing out how economic freedom can address them.  If you've wondered why your local paper doesn't have quotes from 19th century left-populist free market economists, it may be because you aren't writing them in!  (And yes, this letter is basically an abridgment of one of my old C4SS pieces, but since they haven't bothered to try to get newspapers to run their stuff since 2016, I may as well follow the wisdom of Abbott and Costello: "If there's anything else I want you to do, I'll do it myself!")
Posted by Joel Schlosberg at 1/16/2020 11:34:00 PM No comments:

... my troubles definitely weren't far away, but it was a day of several significant milestones: