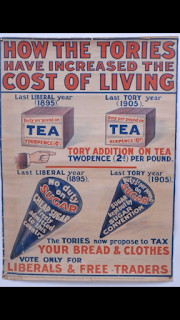 It has been a while since I last blogged about writing for Thomas L. Knapp's William Lloyd Garrison Center for Libertarian Advocacy Journalism, but at long last I've capped off a planned troika of op-ed commentaries started this summer with the Oscar-baiting "The Madness of the Academy."  "Can't Stop the Bookstore" struck back with my examination of how Amazon's $15 wage may not be the pure concession it has been assumed to be on both sides of the conflict. Along the way, I took a look at the forgotten history of corporate liberalism, explained how a small bookstore has succeeded where Barnes & Noble failed, and found a plotline that The Simpsons hasn't done yet. The trilogy concludes with "Protectionist Presidents are the Parents of Our Country's Trusts" taking on the still-current fallout of Trump's trade policies, uncovering the hidden history of free trade as a progressive cause.
Posted by Joel Schlosberg at 12/19/2018 11:53:00 PM No comments:

When I posted last week about my commentary piece "The Madness of the Academy" I didn't know if my take on the Academy Award for Outstanding Achievement in Popular Film would get any attention. After some time circulating through the series of tubes, I dare say that it's more popular than the Oscar itself. It's made its way to the New Haven Register, Citizens Journal, USA Today's The Spectrum, and Counterpunch (and, via Counterpunch, to Open Mind News, Radio Free and Bestseller Magazine).

It's even made it to the print-as-in-on-actual-newsprint opinion pages of The Register Citizen, The Middletown Press, The Daily Lobo and Salt Lake City Weekly. And no, I'm not Tom Knapp (but then again, that's what I want you to think - have you ever seen us in the same place?), but the words inadvertently credited to the guy who created The William Lloyd Garrison Center for Libertarian Advocacy Journalism, wrote 99% of its content, encouraged this piece and got it ready for publication, and sent it to thousands of outlets are mine (as corrected in the online version).  And I dig Salt Lake City Weekly's cool and well-designed layout, in which a reader opening the page to those words of mine would see them in the company of Peter Yarrow, He-Man and She-Ra with beer buddies Skeletor and Orko (the Trollan's imbibing explains a lot), and even an installment of Tom Tomorrow's cartoon This Modern World!

This won't be the last op-ed I write for the Garrison Center (how many I write and how fast I write them depends on how much Tom has to pay me for them), but if there are any publications you think will be interested in running this not-yet-dated take on the Academy, let them know!
Posted by Joel Schlosberg at 8/30/2018 11:49:00 PM No comments:

In Which I Grouch About the Oscars

"The Madness of the Academy" is my take on the Academy Award for Outstanding Achievement in Popular Film, my first commentary piece in a long time for Thomas L. Knapp's The William Lloyd Garrison Center for Libertarian Advocacy Journalism. I've enjoyed getting back in the op-ed writing game and set to write a couple more in the coming months ... but I'll be able to write more of them if Tom has more money to buy them from me!
Posted by Joel Schlosberg at 8/20/2018 06:49:00 PM No comments:

"Herman, as head of the house, I think you should get to the bottom of this. Now, you go right on upstairs and have a father-and-son talk with your boy."

"Well, gosh, Lily, I'm not very good at that, y'know, dear. You're his mother. Why don't you go up and have a father-and-son talk with him?"

"No! A think like that is up to the father!" Anyone who's watched Father Knows Best for nine years ought to know that."

"All right. But Donna Reed always handles these things on her show, y'know."