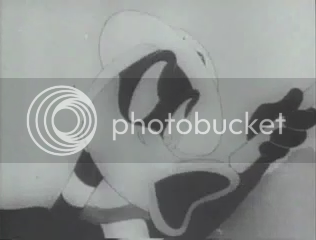 Back in the days of VHS, one of the common items were cheap compilations of cartoons that had fallen into the public domain, and which could therefore be distributed by third party companies. (I still have a Daffy Duck videotape from 1989). Nowadays, thanks to the wonders of the Internet, it's possible to see the same cartoons online for free. Archive.org is the dean of public domain video sites, but ReFrederator is a new site that, incredibly enough, posts a new cartoon each weekday!

The cartoons include everything from old-fashioned Popeye action and Warner Bros. mischief (with looney standbys like A Corny Concerto, Pigs in a Polka, and Wackiki Wabbit) to the exploits of far more obscure characters like Flip the Frog, Molly Moo-Cow, and Willie Whopper (Ub Iwerks's studio is the most consistently entertaining of the lesser-known studios sampled). 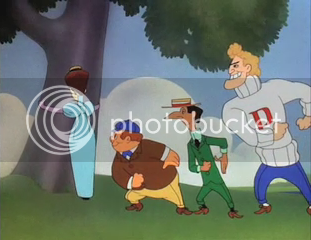 Stylistic experimentation abounds in cartoons like The Dover Boys, Chuck Jones's pioneering 1942 foray into stylized animation that anticipates the style by a full decade, while also managing to be funny in spoofing the Victorian-era fiction of half a century earlier. (On the other hand, RF hasn't had much animation made with alternative, non-cel techniques; Ray Harryhausen's early puppet stop-motion version of Hansel and Gretel is the only stop-motion cartoon yet posted.) Propaganda ranges from the prototypical WWII piece Scrap Happy Daffy to the soft-sell milk promotion of The Sunshine Makers to the Red Scare barbs at the Soviet Union and the IWW of Alice's Egg Plant. 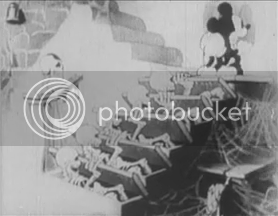 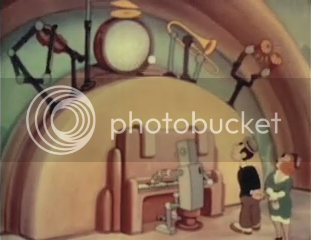 There are also a number of science fiction and horror entries, from the straightforward skeleton-filled haunted-house horror of Spooks and The Mad Doctor, to the techno-futurism of the Fleischer World's Fair tribute All's Fair at the Fair (complete with dancing robots!) to wild combinations of both genres, like the Willie Whopper tale Stratos Fear (in which he floats into space and encounters everything from self-decapitating birds to a Harpo Marx caricature).