Last month, dorkbot-nyc got off on a roll with its first meeting after the summer hiatus.

Bret Doar showed his hybrid roboticized musical instruments including the Huffyphonic Gyrobanshee 1000, a combination of a bicycle wheel and a guitar. Jon Lippincott demonstrated Vis Virtual Universe, which displays and navigates through a surreal 3D animated solar system, which he wrote from the ground up in C++ (which fit in with my blenderheaded fascination with all things related to 3D computer graphics). David Kareve explained his exhibit which uses freaked-out crash test dummies to explore the culture of fear reinforced by the terror alert system; I was tickled to see that his presentation of the various spoofs of the terror alert system included the Sesame Street one that I've had on my blog sidebar almost since the beginning of the blog (which I got from freeman, libertarian critter): 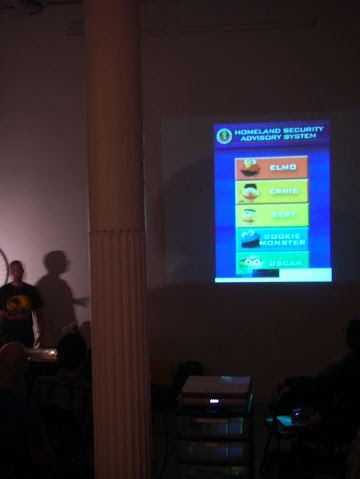 The next day's installment of the popular video blog Rocketboom did a segment covering the meeting. For more media coverage, dorkbot's instigator Douglas Irving Repetto is featured in the recent book Makers: All Kinds of People Making Amazing Things In Garages, Basements, and Backyards by Bob Parks.

This Wednesday brings October's meeting. (In fact, I made a flyer for the meeting which just went live on the site last night, who knows whether anybody will see it).
Posted by Joel Schlosberg at 10/02/2006 11:29:00 PM